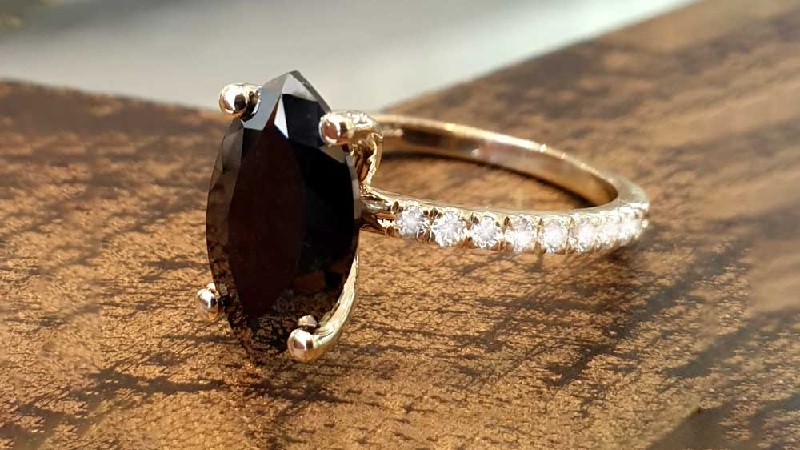 Diamonds have captivated hearts and minds since time immemorial with their brilliance. And compared to colourless diamonds, say, a black diamond necklace is more affordable. Black diamonds, sometimes known as carbonados, were historically solely used in manufacturing. They are the go-to for edgy, non-traditional engagement rings. Moreover, they are rare and beautiful and have all the hardness and lustre of colourless diamonds.

No other type of natural diamond can withstand as much pressure as a black diamond. And in light of the presence of N2 and H2 in the gem, some scientists have hypothesised that it originated in another solar system. Meanwhile, the finest ones are entirely opaque, have no discernible white inclusions, and have a superb cut.

They have not always been seen as precious or highly sought after. Jewellery buyers first became interested in the stone in the 20th century, when designers began putting them in contrasting environments alongside colourless diamonds.

Black diamonds are more uncommon than white diamonds since they form naturally. As a result, most ones for sale these days have been treated in a lab, which is standard practice.

These diamonds are graded using the GIA’s Color Grading System for Coloured Diamonds since their colour puts them outside the scope of the International Diamond Grading System.

Natural black diamonds are colourless or opaque stones with vast volumes or ‘clouds’ embeddings of graphite and other minerals. In contrast to white diamonds, usually found in a single crystal, black diamond gems comprise several tinier crystals. And in addition to the inclusions, the mineral structure absorbs light instead of reflecting it, which is why the stone seems black to humans. They are primarily inferior-grade white diamonds that have been treated with heat or ‘burnt’ in raw condition to obtain the desirable black colouration.

There is a significant amount of graphite particles in naturally occurring black diamonds. Consequently, it is challenging to cut and polish them without shattering them. As a result, it takes a lot of work.

They are not eligible for a GIA Clarity rating since they are inherently opaque and densely included. Meanwhile, a true black diamond should be homogeneous in colour all the way through and have a surface that sparkles with such a high sheen that it seems nearly metallic.

While the ideal approach to cleaning your diamond is to visit a professional jeweller, you could always wash it yourself at home. Take some hot water in a vessel, and add a few drops of gentle soap or handwash. Avoid harsh detergents. Now, brush carefully with a gentle toothbrush, and tap it dry with a clean cloth. Remember that it is more likely to shatter if handled harshly because of its many embeddings and fractures.

The Secret to Its Colour

Its colouration has only recently become the subject of scientific investigation. Most naturally coloured black diamonds obtain their colour from clouds of minute mineral inclusions like graphite, pyrite, or hematite that spread throughout the stone. Diamonds that have been graphitised or dyed black may also have multiple cleavages or fractures. The concentrations of these intrinsic characteristics are what produce the colours. Likewise, such a natural stone’s body colour can be from almost colourless to brown or even “olive” green.

Opaque and highly reflective ones that occur in nature often have a metallic sheen. It might be challenging to cut and polish densely included diamonds. Even more so, they require careful setting. However, a high-quality one that has retained its inherent hue is a stunning gemstone. In addition, the price is usually lower than that of a comparable diamond.

Today, most black diamonds on the market have been treated to induce their colour, making them suitable for a black diamond necklace or an engagement ring. Meanwhile, numerous diamonds undergo a high-temperature/low-pressure treatment that graphitises the fractures and turns them black, but they start as grey, highly included, and shattered stones. For instance, it is possible to create a green so dark that the diamond seems black using artificial irradiation of off-colour diamonds.