What are the Benefits of React Native App Development? 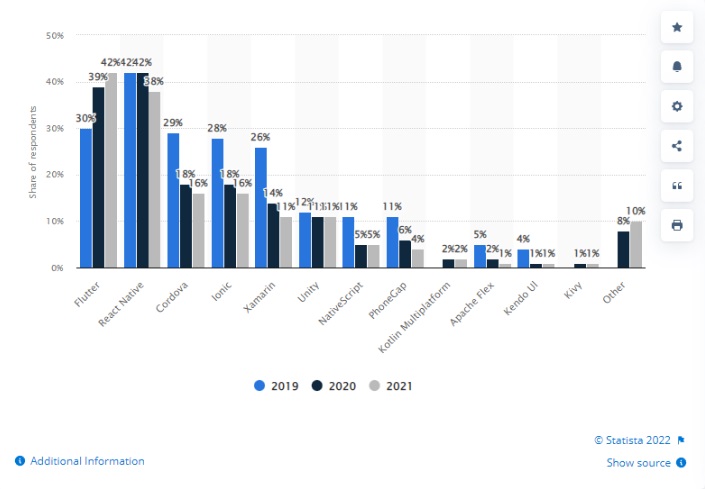 When it comes to cross-platform app development, React Native is one of the most widely used development frameworks out there. Since its launch in 2015, React Native has grown more and more popular, sometimes going head-to-head with another industry giant called Flutter.

A recent developer survey revealed that React Native was the most popular cross-platform app development framework in 2019 and 2020. Although its popularity saw a slight decline in 2021, React Native holds second place in terms of user adoption.

If you are planning to hire React Native developer to help you build complex cross-platform or hybrid applications, make sure to learn about the benefits of React Native app development.

This will not only cement your faith in the platform and in your decision, but will also shed light on how you can use React Native to build modern applications with advanced features and satisfactory user experience.

There are several immaculate and unparalleled benefits of React Native app development. To truly appreciate the advantages of React Native, you must first understand the nuances of how this framework works. Here are a few important things you need to know:

Now that we have covered the basics of what makes React Native unique and attractive to developers around the world, it’s time to look at the top benefits of React Native app development.

One of the crucial benefits of React Native app development is code reusability. When working with this framework, developers have the luxury of writing the code just once and reusing it multiple times.

What’s interesting is that code reusability is not just limited to mobile apps. Developers can use the same code for website or web app development as well. Needless to say, it saves a lot of time as it eliminates the need to write separate codes for different platforms.

The framework also offers a comprehensive set of pre-developed components that make mobile app development easy and fast. Its open-source library allows developers to write the codes beforehand. So, they can use the pre-written codes as and when they need.

Readymade solutions and a comprehensive library:

With React Native, developers get a plethora of readymade solutions that enhance the overall development process.

For example, it has a testing library, where developers can write and test bug-free code. That ultimately helps in building a flawlessly coded end product.

Whenever changes are made to the code of an app, developers need to save the code and reload the app to see the changes. Needing to reload the entire app for every minor code change is time-consuming and annoying.

React Native offers a smart solution to this problem with two of its innovative features called hot reloading and live reloading.

With hot reloading, developers can make changes in the code and see the changes in the app without having to reload the entire app. As soon as new changes are saved in the code, React Native tracks the files that have been updated and only reloads those files. Hot reloading makes the whole process fast and efficient.

Hot reloading is derived from the HMR or Hot Module Replacement. HMR helps to update the files and keep them at a specific spot while the app is running. This allows React Native apps to handle multiple tasks at the same time.

Live reloading, on the other hand, reloads the entire app, but it does not save the app state or completely launch again. This feature is mainly used for reading and compiling files. When live reload is activated, a new file is added to the simulator. This file allows the simulator to automatically read the app from the start.

A cross-platform app built with React Native runs well on both iOS and Android. That means developers can publish their product on two of the most popular platforms without having to spend money on two separate native apps.

The features of React Native are designed to facilitate rapid development. That means the development firm can launch their product fast and gain maximum attention with the right marketing strategy.

One of the undeniable benefits of React Native app development is that the developers have access to a large and vibrant community of helpful experts. The best part about this community-driven technology is that it is welcoming of newcomers and amateurs who find ample support from developers around the world.

Developers can also use the platform for building their portfolios and sharing their experiences. This type of engagement inspires them and other developers to write better and more efficient codes.

Building hybrid or cross-platform mobile apps with React Native is way cheaper than building native apps for each platform.

Its code reusability feature not only saves the developer’s time, and the reduced man hours directly translate to lower cost. With React Native, even small development teams can build and release high-quality products within a short span of time.

Furthermore, working with a single programming language has several unique perks. For instance, it completely removes the elements that hinder development between two different platforms. When working with React Native, every member of the development team stays on the same page.

The smooth and streamlined development process of React Native ultimately improves productivity and leads to better conversion in the long run.

These are the most notable benefits of React Native app development. The framework offers several more nuanced advantages that you will only get to know about when working with it.

Wrapping Up: When Should You Use React Native for App Development?

Here are a few instances where React Native is the ideal choice for a development framework:

Things To Consider When Buying A Pet Stroller